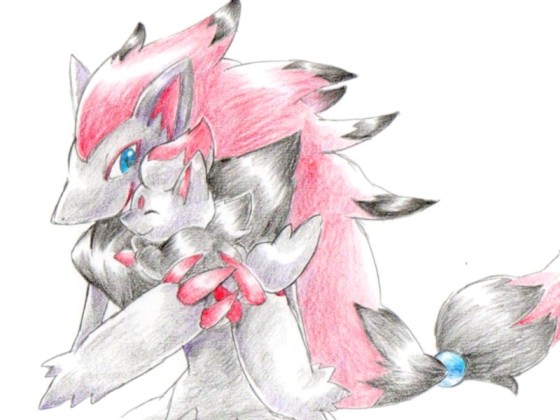 Zoroark, or Zoro for short, is an elderly character in his mid-60s who runs a shop in Treasure Town called "Zoroark's Supply".

Zoroark was born in a region far away from Treasure Town. As a young Zorua, he mostly stayed by himself, not wanting to interact with others very much. However, after he stumbled across a Buizel one day, they became friends, and soon formed a group that consisted of him, the Buizel, a Riolu, an Elekid, and a Mienfoo. They all shared the same dream of becoming famous explorers, but their parents wouldn't allow it until they reached a certain age.

After they all turned 10, they finally ventured forth to become members of a local guild. When they reached their guild, located in a cave in the side of a mountain, they were questioned by the Guildmaster Flygon on why they all wanted to join. After the interrogation, they were finally brought into the fold and became Rescue Team Go Go Five, a name thought up by Buizel and was initially rejected by the rest of the team and caused them all to be teased by their peers. However, eventually, the name stuck. They all had different roles when the team first formed: Buizel, who eventually got nicknamed Chief, was the goofy fireball leader with a heart of gold. Riolu was the tactician of the group, thinking up strategies for how to approach missions and enemies. Zoro was the resource manager of the group, managing their money and supplies. Elekid was the muscle, preferring to punch his enemies square in the jaw over using his electrical abilities. Finally, Mienfoo was the face of the group, dealing with any of the talking when it came to missions or information. Their stars quickly began to rise after taking down a rogue Tauros that was terrorizing a nearby town. After that mission, they seemed to get one amazing victory after another, with their greatest achievement being fighting the legendary Pokémon Entei to a standstill.

Many years later, after they reached their highest rank they could possibly achieve, Headmaster Flygon became ill and eventually died. He was soon replaced by Headmaster Sceptile, who wasn't very well received and was known to slack off on his duties. So after he became Headmaster, he hired a secretary Zoroark named Annabelle to do the paperwork. Zoro met Annabelle after returning from a long mission and the two hit it off right away, becoming fast friends and eventually a couple. Soon, they had decided to settle down and start a family, but those plans were tragically cancelled...

One day, the team received word of a mission that would pay enough to allow the team to comfortably retire from being a rescue team, and after Zoro and Annabelle shared one last night together, he left to join his team in what was supposed to be their last mission. Their goal? Retrieve an ancient artifact from a Mystery Dungeon. At the time, nobody really knew what a Mystery Dungeon was, because this area didn't have nearly as many compared to Treasure Town's region. They were able to make it to their goal without much trouble, but when they reached their destination, their artifact was nowhere to be found. It turned out to be a trap, and they were ambushed by wave after wave of pokémon led by a shady Hypno only known as Zero. They did their best to fight them off, but they were eventually overwhelmed and defeated, with Zoro's last memory of the ambush being watching Chief being dragged off before he passed out.

After Zoro came to, he found himself outside the dungeon injured and hungry. He was forced to live off the land for days, coming close to death before being saved by a friendly tribe of pokémon. He lived with them for months as he recovered, and he eventually gained their trust enough for the tribe's chief to show him the ancient art of drifting, a process where two pokémon connect their minds to one another, allowing them to share their memories, secrets, and knowledge. After he left, he returned to town hoping to see Annabelle again, but she was nowhere to be found. No one in town or in the Guild knew where she went, and almost none of them knew that she had even left. He then decided to go out and search for her himself, but not before being approached by his friend Smeargle, a local shop owner who was trying to branch out. He promised to help fund Zoro's search if he would act as a traveling merchant, selling Smeargle's products and spreading the word about his shop. Zoro agreed and set out to find his lost love, spending the next forty years traveling the world and meeting all sorts of new pokémon. However, his search was fruitless and his age began to catch up to him, and he found himself unable to travel as well as he used to. Smeargle, who was now a wealthy businessmon, decided to repay Zoro for his years of hard work and gave him a house he wasn't using in Treasure Town and the money to start up his own shop. Zoro then reluctantly retired from his search, now old and bitter from the trauma he endured.

Zoro may now be retired, but that doesn't mean that his fighting spirit has diminished any. Since he moved into Treasure Town, he has kicked out a rogue Ampharos from his shop, helped a Jolteon after he was gravely injured, drifted with another Zoroark with no memory, and has adopted a daughter which he named Zoe. He may be old, but he has far more adventures and battles to experience, and maybe he'll finally find closure to his troubled life.

Community content is available under CC-BY-SA unless otherwise noted.
Advertisement