Dubs is a shiny Teddiursa, who is controlled by Nidoqueen.

She was found as an egg by Zangoose in a forest, who had considered eating her had Nidoqueen declined to take care of the egg. Eventually, she hatched, and Nidoqueen gave her the name Dubs. She was also given a teal bandana by Zangoose as a gift to remember her by, as well as a cute accessory. She still wears it to this day.

Not much has changed with Dubs' personality after the world implosion. But then again, she is just a baby. However, she has recently taken a huge liking to a Shy Glaceon to the point where her name was the first thing she learned to speak. She also grew up quite a bit, as she is now capable of walking and (to an extent) talking in somewhat coherent sentences 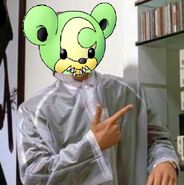 A picture of Dubs, check it.

How Dubs gained her name
Community content is available under CC-BY-SA unless otherwise noted.
Advertisement